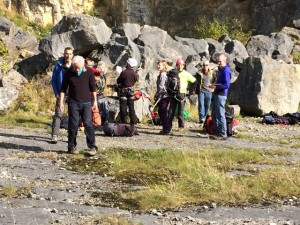 After a week of nervously watching the forecast with the potential for rain being suggested and then withdrawn, ten hardy SMC members met up at Horseshoe Quarry, near Stoney Middleton.

Despite the fact that this crag has featured in the magazines recently we were pleasantly surprised to find only a few other parties there. So SMC members spread out and visited most areas of the extensive quarry from Star Trek wall to the slabs, on to main wall and then the upper tier.

Roger, Mark, Dave, Pete, Clare, Rob, Alex, Richard (yes Richard!), Ed and Ian had a brilliant day’s bolt clipping. In fact it was so nice, there was even evidence of quite a bit of topless climbing (funny how it’s always the men). Not only did everyone have a great time climbing some of us were lucky enough to spend the afternoon climbing near and chatting with the great Ron Fawcett. All followed by a pint at the The Moon, how could it be any better? 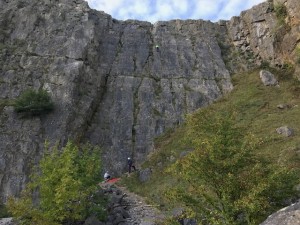