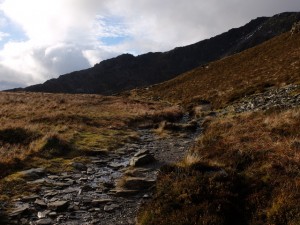 Vagrant, hobo, beggar and wanderer are all completely inappropriate synonyms for the brilliant Vagabond hut in Nant Peris, scene of the SMC’s most recent meet. Richard, Christoph and Ian were the three hardy souls wanting to put some hill time in their legs along with some interesting navigation practise.

Leaving the cars at the hut we headed up to the Glyders; when have you ever been into the Glyders from the Llanberis side? Low cloud and rain made for some interesting navigation up towards Foel-goch along a little trod route with some pretty barren patches: all good stuff. Once up at the main ridge line the drama of the contours makes life for the navigator much easier. Up and over Y Garn, and on the descent we begin to see quite a few more people, until this point we thought we were the only ones out in the hills enjoying the cloud, wind and rain. Pass the top of Llyn y Cwn to head up to Glyder Fawr. At the summit there is even a little snow clinging on to remind us this is a winter venture. But where to go now? If we go over to Glyder Fach we’ll have to descend to either Pen y Gwryd or Pen y Pass, no one fancies the trip back to Nant Peris from there. So we drop back down past Llyn y Cwn and on to Gwastadnant and back to the hut. Get the wood burner going and hang all our clothing to get it dried out for tomorrow, hopefully. Did I mention that Ian had to twice take off his boots and wring out his socks en route? That night in the Vaynol Arms we happened upon a male voice choir singing carols, of course we also had to sample the food and beer.

Sunday, and guess what? It’s still raining. No problem we’ll go over to Moel Siabod and do an easy scramble on the South East ridge. But in the Bryn Glo car park it has now stopped raining, luxury. A group of guys approached us and asked for directions to the Watkin path up Snowdon. We had to tell them to get back in their van and return to where they had just come from! Apparently they were navigating by Post Code!

None of us had been on Moel Siabod before and we had a very enjoyable walk in and scramble. We even had decent views from the summit. All of which goes to prove that you don’t have to have good weather to have a great weekend, though it does help a little. 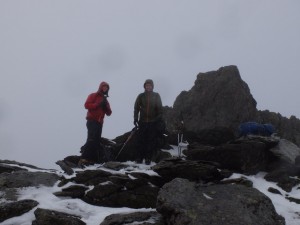