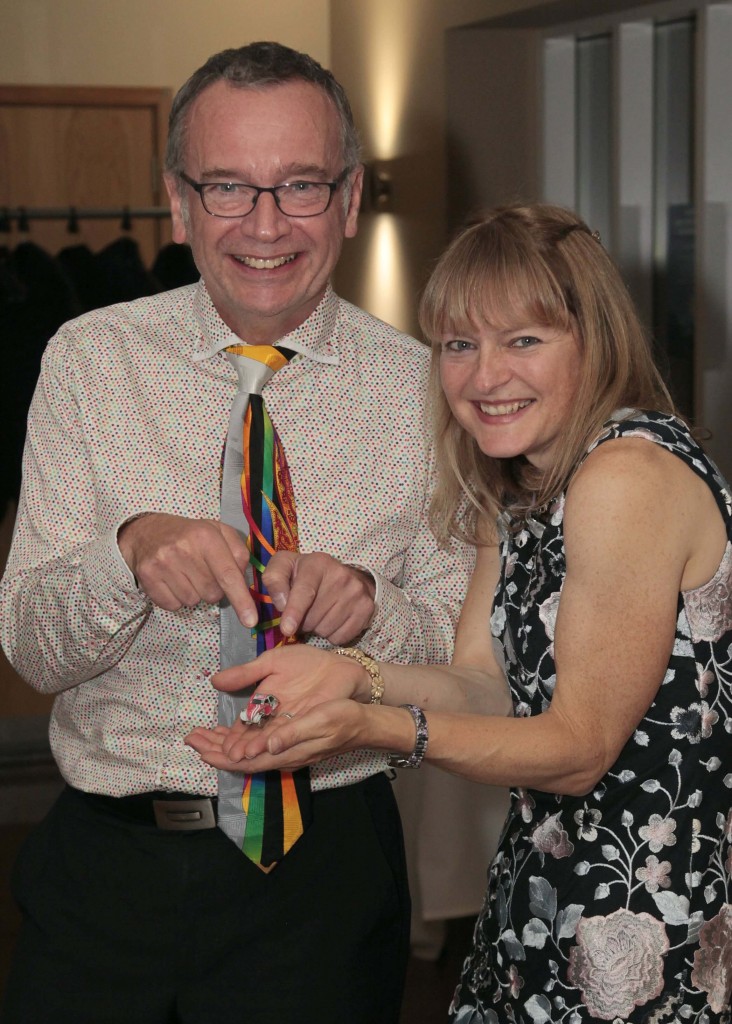 Our much anticipated 60th Anniversary Party took place on Saturday 29th September 2018 at West Warwickshire Sports Club, Solihull. The event was well attended with eighty partygoers enjoying a fabulous evening of entertainment and good company. Present on the night was a great mix of past and current SMC members and there is no doubt that a lot of catching up took place throughout the evening.

Unfortunately founding member Alec Tapper was not able to attend on the night but wished ‘one and all a very successful and enjoyable celebration.’

It has been a busy year for the club and the evening commenced with Ian W reviewing some of our adventures. The meets calendar has been as busy as ever with Mark H, Meets Secretary, somehow managing to arrange some excellent weather throughout all of the summer meets too. Thanks Mark, can you do the same next year as well? The highlight of this year’s meets programme must surely have been the three-week trip to the Ecrins. Not only was the trip much enjoyed by all who attended but, as it transpired throughout the evening, it also proved to be a great source of ‘incidents’ for the much-coveted SMC awards!

After the formalities, we all tucked into a very tasty hot buffet, with the sticky toffee pudding being a particular favourite! The Ceilidh band, Moggy in the Wood, then took to the floor, as did many of the partygoers. It would appear that some of the dancers were more robustly encouraged to join in the ‘promenading’ than others, but once the music started even the more reluctant participants seemed to be enjoying themselves. Luckily there were no major collisions and, overall, everyone kept apace with the caller’s instructions. Well-done dancers!

The SMC awards provided an opportunity for everyone to have a rest from the dance proceedings. Following in the tradition of all good Awards ceremonies, several of the recipients were not able to attend on the night to collect their awards. Though we understand that since the party all have been united with their respective trophies!

Notable winners included Rob Tresize who received the Nigel Mansell Award for valiantly driving all the way back from the Ecrins in an epic solo journey. He also snatched the Peel of the Year award away from regular winners Ian W and Phil L. This was a complicated tale involving disintegrating climbing shoes at the Ecrins and it is probably best to leave it at that! Pete and Clare L were the ‘proud’ recipients of the Golden Tent Award. Given in light of their noble endeavours, alongside those of Donna M, to bring the SMC into the 21st century of camping with their recent acquisition of air tents. The final tale of bravery went to club favourite Richard Hemes, who, though unable to attend on the night, scooped the International Rescue award for what can only be described as a death defying rescue of his packed lunch. I think many SMC members will appreciate that to Richard H loosing his sandwiches is almost as serious as dropping his flask of tea! The deft use of climbing poles enabled Richard to retrieve the lost sandwiches and therefore averting what could have been a very traumatic event.

A special mention must go to Sue and Margaret for creating all the beautiful autumnal decorations that adorned the tables. Also to Jo D, who throughout this year has been compiling the entire Club’s old minutes, which has been a major piece of work to take on. On each of the tables were selected excerpts from these minutes for us all to read throughout the evening.  Also a big thank-you to Allan Sanders for taking all the photos throughout the night.

Most daring act of the night went Helen E and baby Gwen who had surreptitiously ‘borrowed’ a selection of Daddy’s climbing gear to weigh down the celebratory balloons. This probably did make Daddy Phil a bit twitchy throughout the night but we are led to believe that all the gear was safely returned to their rightful owner at the end of the evening!

On the night particular thanks was paid to all the 60th Anniversary committee for their efforts in organising the party and all the other celebratory events that have taken place throughout the year. As a member of that anniversary team, I would like to add that throughout the year this committee was expertly led by Ian W, who has worked tirelessly to ensure our 60th year has been one to remember.  The final vote of thanks must go to both Ian and his lovely wife Sheila who have hosted almost all the Anniversary Committee meetings at their house.  In particular to Sheila, who throughout the meetings has provided us with the most delicious selection of biscuits and snacks. So many thanks Sheila! Biscuits are definitely the best thing to motivate a committee, especially chocolate ones!!!

SMC Dance the Night Away at 60th Anniversary Party