Mummy took me for a walk last weekend. She and Daddy belong to this group of weird people called Solihull Mountaineering Club. They believe that it is nicer to go outside on a windy Sunday with temperatures just above zero rather than sitting in comfort with nice food and books to chew.

We went to a place called the Roaches. It was a long car journey but they seemed to be happy when they got there.

There were quite a lot of them. Mummy and I went for a walk with nine other odd people. 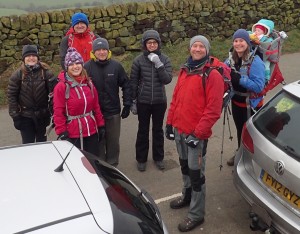 That’s me at the top right in my special rucksack.

Daddy stayed at the bottom of the cliff with lots more odd people. They were doing something called “bouldering”. They find a small bit of rock, put some mattresses at the bottom (which, in my view, would be much better used to have a snooze on) and then try to climb to the top and down the other side. I do not understand why they do this because you can walk (well they could – I can’t yet) round the other side very quickly. But mummy and daddy enjoy doing this indoors – so I suppose it makes sense for them to do it outdoors as well. 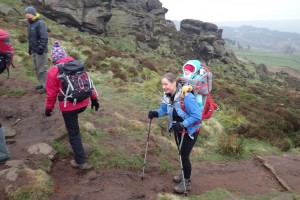 This is a picture of me with female parent slave mummy – oops mustn’t make it that obvious!

The hill walkers went up a steep hill and lots of steps to another cliff and then right onto the top where it was very windy and very cold.  Luckily mummy had wrapped me up very well and it was just a bit cold on my face.

We came to lots more rocky things. One of the odd people decided to try doing some bouldering (without a mattress to lie on and in his hiking boots!). He tried very hard …. again ….. and again but couldn’t do it. 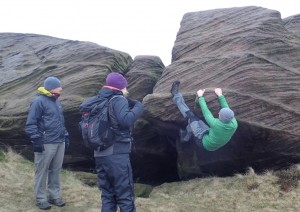 Then we went down to a road past an ice cream van (brrrr..), over a road and down into a forest.  After a while we came to a very strange place called Lud’s Church.  It was a big chasm which some brave people went down into from the very start. A bit further along there were some steps which mummy took me down.  It was very green and creepy. The very odd person who had tried to climb a boulder earlier thought he would blend into the background but even I could see that was not going to work. 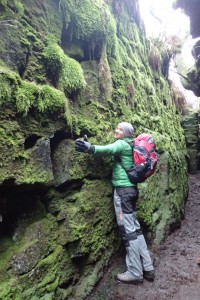 One of the very old odd people, with lots of white hair, said that a long, long time ago, some people who did not like the church used to come here to pray. If they got caught the church would probably burn them. That did not seem a very nice thing to do to people. He was so old I think he might have been there.

We all had some food at the end of the chasm and then walked round to the edge of the ridge.  Mummy carried me back up the hill to go back. It was very samey now – so I thought I would have a little snooze.

Imagine my horror when I woke up. Mummy decided to stop and “change” me. This does not mean getting a new baby. Instead she takes all the clothes off my bottom, which is always very embarrassing, but here it was very cold as well.  Fortunately the odd people we had been with decided to walk off and leave us to it. So they did not have to watch the ignominy of it all.

We got back to the cars and went to find Daddy.  The boulderers, as they like to be called (funny name – I’ll never learn to spell that when I get bigger),  were all sitting in the pub pretending they had been warm the whole day.  Some were still shivering so I don’t think that was at all true.

I had a great day ……. time for another snooze….

Gwen’s Trip to the Roaches